A downloadable game for Windows and macOS

Grab a friend and play Nugget & Penny
as they fly into a new adventure.

Follow the development of the new Nugget & Penny
👉   https://notslot.itch.io/nugget-and-penny   👈

When the kids' flying machine crashes in an unknown location,
you and your buddy must cooperate to find all
the missing parts of the Adventure Machine.

In your quest you might find yourselves surrounded by
mocking monkeys, tricking a vengeful robot
or even dodging giants' legs.

A graduation project at Bezalel Academy of Arts and Design

I can't seem to get my controller working. How do you set it up? :<

Hey guys,
Thanks for the kind words!

Hey Guys! Thanks for making this game, I'm starting to make youtube videos and I played it with my dad. We had loads of fun and can't wait for more Nugget and Penny! :)

This is one hell amazing game. Great graphic and story telling, we play those boxes when we are small too

I played this with my 11years old cousin :)

Do you plan on making more game like this?

We are so happy you guys enjoyed playing!  Thanks for playing and sharing on YouTube.

For now, we are focusing on crashing bugs and improving this game before moving on...

tell me if you create something especially the one like this :)

btw, i just created a jam for physical game. be sure to visit us

OMG !!
You guys were so funny I laughed through all the 22 minutes.
Sorry for the glitches 😅we are working on crashing them.
And thank you so much for your thoughts on the levels, it's really helpful!
Thank you❣️

Happy to hear you enjoyed the video and watched the whole thing. Really enjoyed like 2 out of the 3 mini games, the dinosaur stomping  balancing act was frustrating but overall still enjoyed the game and was happy to play it all the way through.

Wow this game looks great! I started playing it with my friends and we had so much fun. The art style and characters that you have created were so cute and funny. The part when one of the characters had to balance on the others person's shoulders was really difficult, it didn't either help that we were at each other's throats with my friend either. It was so much fun and the music in the game really created a great atmosphere. You really have made a hilarious game to play with your friends :D

I don't know if you've heard of Game Development World Championship before (gdwc2019) but it's a competition for indie game developers where they can submit their games and it's free! It's great if you want some more visibility for the game and it only takes a couple of minutes to join :) 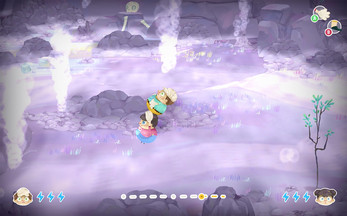 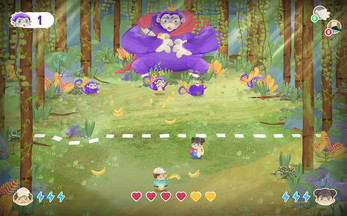 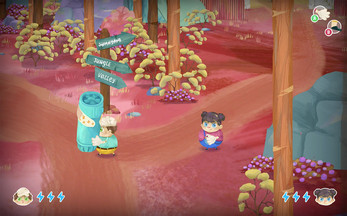